Posted by http://srilanka-mujahedin.blogspot.com/ at 9:02 am 0 comments

s
Posted by http://srilanka-mujahedin.blogspot.com/ at 6:23 am 0 comments

'Terrorist No 1' gets Nobel Prize for Peace! by Dr Zakir Naik

Posted by http://srilanka-mujahedin.blogspot.com/ at 9:40 am 0 comments

“Pay the laborer his wages before his sweat dries.”

Posted by http://srilanka-mujahedin.blogspot.com/ at 10:50 am 0 comments

Posted by http://srilanka-mujahedin.blogspot.com/ at 10:01 am 0 comments

Posted by http://srilanka-mujahedin.blogspot.com/ at 11:58 am 0 comments

Ever since the current prime minister of India Narendra Modi came to power in May 2014, 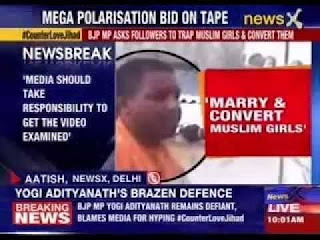 there has been a perceptible shift of Hindu nationalism that has blossomed into spoken threats against India’s largest minorities, Muslims and Christians. Following the elections, Modi said: "My government’s only religion is ‘India first’; my government’s only religious book is the Indian Constitution; our only devotion is ‘Bharat Bhakti’, and our only prayer is for the welfare for all." But Modi is from the Rashtriya Swayamsevak Sangh (RSS) party of India, an arm of the Bharatiya Janata Party (BJP), one that has been severely taken to task in previous years for their incitement and execution of violence against Muslim and Christian minorities.  The RSS head M.S. Golwalkar once stated that “the non-Hindu people of Hindustan must either adopt Hindu culture and languages, must learn and respect and hold in reverence the Hindu religion, must entertain no ideas but of those of glorification of the Hindu race and culture...in a word they must cease to be foreigners; or may stay in the country, wholly subordinated to the Hindu nation, claiming nothing, deserving no privileges, far less any preferential treatment— not even citizens' rights.”So while publicly Modi can say whatever he wants, the realities are different and there’s no denying the sudden burst of life among the radical elements since the BJP came to power.  There have been reports of forced religious conversions to Hinduism and public outbursts by BJP officials and figures against minorities.Hate speech which has incited mob riots and created communal discord over the years in India is on the rise, and although there are laws on the books against such incitement, application of the law in a BJP dominated government seems remote.  Section 153 (A) of the Indian Penal Code specifically prohibits hate speech and says that a "person can be punished with imprisonment which may extend to three years, or with fine, or with both."  But the speeches continue unabated, slowly stoking the fires of violence against minorities.Some have taken this newly found freedom to greater levels.  Mahanth Yogi Adityanath is an Indian politician and a priest. He has been a BJP Member of Parliament since 1998.Adityanath is the head priest of a Hindu temple in Gorakhpur and founder of the Hindu Yuva Vahini, a nationalist group of youth who seek to promote right-wing Hindu ideology.In March of this year, during a rally where he was the chief guest, one of his supporters took to the stage and delivered a speech saying that Hindus should dig out dead bodies of Muslim women and rape them. In a high-pitched hate filled vitriol, the supporter also called for Muslims' voting rights to be taken away stating that this was important for the creation of a Hindu "rashtra" or nation.  Yogi Adityanath simply listened, his silence a sign of plain encouragement.There have been other hate speeches from BJP affiliated political leaders and workers. Varun Gandhi, a grandson of the late Indira Gandhi and a BJP party member is quoted as threatening to cut off the arms of those who impede Hindus.  Then there are those who insist that the Bhagavad Gita, the Hindu scripture, be adopted as the national book and others who downplay the achievement of anyone who’s non-Hindu like Mother Teresa, terming anyone who questions this logic as anti-national. Anuja Jaiman, a popular journalist in New Delhi says that "getting offended on behalf of religion, god(s); presuming responsibility as a spokesperson of a religion, making derogatory statements and outraging for the wrong reasons appear to be taking India by storm. This national hobby is a dangerous one to adopt and it doesn't need a scholar to understand that.“India is a culturally diverse and secular nation, at least according to the Constitution. Hate speech is one of the major thorns in the side of our democracy, which if not checked, will result in spiraling hatred. That may be the agenda of some, but we can choose to not play into the hands of the haters.” And Mike Ghouse an American of Indian origin who is committed to building cohesive societies where no human has to live in apprehension of others concludes that “God save Modi from his 'chumchas' (brown-nosing hangers on), and I pray that he is aware of what is going on.  If he does not speak up, his dream of being one of the best prime ministers of India will be shattered and 'sab ka sath sab ka vikas' will become a pipe dream. Not good for India.” Indeed, if such incidents are not brought to a halt, India’s democracy will be a thing of the past.
http://www.saudigazette.com.sa/index.cfm?method=home.regcon&contentid=20150805252427
— The author can be reached at talmaeena@aol.com. Follow him on Twitter @talmaeena
Posted by http://srilanka-mujahedin.blogspot.com/ at 3:00 am 0 comments

Posted by http://srilanka-mujahedin.blogspot.com/ at 10:58 am 0 comments

Yakhub Memon is not Justified

Posted by http://srilanka-mujahedin.blogspot.com/ at 7:26 am 0 comments